How to Take Cornell Notes: 5 Steps to Success

In this guide, we'll take you through the step-by-step process of taking high-quality Cornell notes.

It’s no coincidence that the Cornell note-taking method has not only survived but even thrived nearly a century by now. This method is not only very effective, but also one of the most versatile and straightforward to use out of all the note-taking styles I have covered.

In this guide, you’ll learn how to take effective Cornell Notes in five simple steps:

But before getting to that, let’s cover the basics.

What are Cornell notes?

The format of the Cornell Notes helps your brain better understand and retain information. Furthermore, the Cornell system can be used for nearly all mediums of instruction, including physical lectures, live online lectures, recorded online classes, and textbooks.

The method is flexible enough to suit just about any context, as long as you follow the key principles highlighted in this article. Also, here’s a short video about Cornell Notes from Cornell’s Learning Strategies Center (LSC) if you’d like to see some material straight from the source.

Before we get into the step-by-step process of the Cornell note-taking method, let’s examine some data from students enrolled in Cornell’s free “Note-Taking Strategies” course module.

As part of the course module, students are asked how they use their notes post-lecture, and how they wish they were using their notes. You’ll notice some stark differences between the two answers.

Here are the most common words students use to describe what they do with their notes:

And, here are the most common words students use to describe what they want to do with their notes:

The students’ hearts are in the right place – studying your notes certainly is better than throwing them in the bin.

However, it’s evident from this module that even Cornell students do mostly nothing with their lecture notes. That is despite effective note-taking being positively correlated with learning achievement time and time again.

Oh, the secret joys of schadenfreude. If you’re one of the select few students able to learn how to execute the Cornell method, you can reap massive rewards and stay far ahead of the curve. All the while the majority of students are doing nothing at all with their notes.

The only downside? You might need to hire a personal assistant to deal with all the students asking for your notes.

Scientific studies on the effectiveness of Cornell Notes

In general, effective note-taking has been proven by researchers to be helpful towards achieving student learning outcomes. Many studies have confirmed this finding, including this 2014 study, where researchers Joseph R. Boyle and Gina Forchelli found that the highest achieving students were efficient note-takers.

However, these studies were designed to evaluate note-taking in general. In fact, there is a surprisingly little amount of research done on the efficacy of the Cornell system in particular. And, the studies which have been done have not always been enthusiastic for its’ efficacy.

For example, in a 2012 study conducted in a high school family and consumer sciences class, students were asked to take Cornell notes. Some of the students reportedly had strong feelings of rejection towards the system, and the study revealed a null hypothesis. Thus, no positive impact could be identified from the Cornell system of taking notes.

But, there have been some positive findings also. A 2019 study conducted in Egypt concluded that Cornell note-taking (and REAP) had a significant positive effect on the critical reading skills of EFL secondary school students.

All things considered, for the time being there is no general consensus on the efficacy of Cornell note-taking.

However, it’s worth mentioning that note-taking is notoriously difficult to measure. Researchers can ask test participants to take Cornell-style notes to assess their recording skills, but assessing the efficacy of reciting, reviewing, and reflecting is far more difficult. And, those steps are some of the most crucial in the entire Cornell note-taking system.

Now that we’re done with the theory, let’s skip right ahead to the different options for acquiring Cornell-style papers.

Before going to lecture and getting into the nitty-gritty of Cornell note-taking, you first need some Cornell note papers.

There are two distinct ways to go about acquiring some of those ever-so-scarce Cornell note papers:

Creating your own Cornell Note papers

That’s awesome – there are many excellent reasons to skip Amazon and go with DIY Cornell Notes:

Now, let’s go over the line-drawing process. It’s very simple but it’ll likely take a few tries for you to become quick and efficient at the process.

In this guide, we’ll be using the proportions that Walter Pauk himself taught in the 1950s. In particular, we’ll be getting our details from his book “How to Study in College“. Scientific literature also tends to use these note-taking column proportions so that’s what we’ll be going with.

Next, draw a horizontal line across the width of the page like this:

The final section at the bottom is called the summary section. I’ll be explaining its’ purpose in the “How to take Cornell Notes” section of this article.

Creating your Cornell notes by hand is not difficult, but it’s not for everyone. That is why some people choose to buy Cornell-style notepaper from the get-go, bypassing the line-drawing altogether.

Here are some advantages of premade Cornell notes:

If you’re looking to buy premade Cornell notes, then a local office supply store is always a good place to start. Or, you could check Amazon (although their prices tend to be higher).

Now, it’s about time to get into the actual steps needed to take Cornell notes.

How to take Cornell Notes

The five steps of taking Cornell Notes are called the “five R-s”:

Record your notes into columns

Now that you have got your Cornell Notes ready and the information is flowing in from the lecturer (or textbook), it’s time to start recording your notes.

At first, you’ll start writing into the largest Note Column. This is the primary column where you’ll be writing down all the main notes and drawings from the lecture. Useful notes record both the important details and the general gist of what the professor is saying.

In the Note Column, to save time and get the best notes possible, you’ll want to use short telegraphic sentences. Telegraphic sentences leave out unnecessary words such as articles and they utilize abbreviations. This is done for the purpose of turning long chunks of information into small, bite-sized pieces that are easier to analyze later.

Depending on the topic, you might also want to add drawings or diagrams into the Note Column. These can help summarize information that is otherwise difficult to put into words.

In addition, consider using bullet points, underlines, and lists in the Note Column. These can be helpful in the reduction of your notes later on and they will make the notes more skimmable.

The notes that you are recording here are the basis for all the following steps. That is why it’s crucial that you come into lectures prepared and ready to start recording.

Most commonly, the cue column is used to formulate questions about the Note Column. After recording notes into the Note Column, you should review what you wrote as soon as possible. Otherwise, you might forget the context behind the initial notes that you took.

Reviewing the Note Column will allow you to get the gist of the text, and based on this, you can formulate relevant questions. To form questions, think of the notes in the Note Column as a set of answers. What question might these notes be the answer to? Write that in the Cue Column, next to the relevant note.

It’s worth mentioning, though, that it’s not always necessary to do this step after the lecture. According to Cornell’s LSC, filling the cue column while taking notes can help your brain stay active and engaged all the while boosting memorization. The LSC also recommends writing in-progress ideas into the cue column and making updates later if needed.

Once you have filled the Cue Column, it’s time to summarize all that information. In the bottom, Cornell Notes always include a summary area and this section is used to summarize all the most important points discussed on the page in a couple of sentences.

Going through these steps will help you reduce your notes down step-by-step, resulting in smaller, content-packed chunks of information, rather than long lines of text similar to a textbook.

Now that you’ve recorded and reduced your notes, it’s time to start memorizing them. For recitation and memorization, I like to use a technique explained by Dave Ellis in his book “Becoming a Master Student“.

Cover the right-hand column (the Note Column) and leave only the Cue Column visible. Now, view the questions that you wrote into the Cue Column and try to answer each and every one of them. Try to do so with as much additional context and information as possible.

After reciting all the answers, uncover the Noe Column and check your answers. Did you manage to recite the answers from memory?

If it felt too easy, then you might want to take more detailed notes in the Note Column. Provide additional context, add drawings – anything that seems relevant to the question.

If the answers were too difficult to recite from memory, then keep retrying until you’ve gotten at least the gist of the answers down. Going through relevant textbooks or video materials can also help you formulate answers if you find your Note Column to be lacking in content.

Reflect on the material

The reflection stage is perhaps one of the most helpful elements of the Cornell note-taking method.

Reflection always happens post-lecture, after you’ve had some time to recite your notes. Based on the successes or failures of the reciting stage, try to think in a self-critical way.

Based on what lecture topics you’re the strongest or weakest at, start targeting those aspects which require further study. Add further notes into the Note Column, find additional learning materials, create new summaries – all this is a part of the reflection process.

Once you’ve gone through all the previous steps, it’s simply time to repeat the process whenever needed.

If a test is upcoming, you’ll want to review and recite the notes from memory a few more times.

If a new lecture is expanding on the topic, you’ll want to review your notes to make sure that you have a solid grasp of the previous lecture’s material.

Repetition is one of the best ways to increase retention, and it’s a step that cannot be neglected. By reviewing your notes during strategical moments, you don’t have to rely on cramming or a “good memory”. As long as your note-taking methods are solid, you can master any topic.

E-Student Newsletter
Sign up for our newsletter to get research-based study tips delivered straight to your inbox.
More on note-taking

The Sentence Method of Note-Taking: A Quick Guide 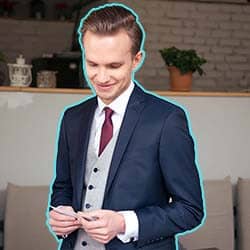 Sander has a background in medical diagnostics, a love for MOOCs, and a particular interest in evaluating online learning methods and platforms. His publications on E-Student have been cited in scientific journals such as the JML Journal of Medicine, Life and Annals of Medicine and Surgery, and the IEEE. He has also been featured in various news outlets such as The Baltimore Sun, Independent Australia, and RBK.